HVAC Considerations for Selling your Home | FurnaceCompare®
Skip to content 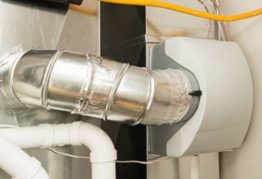 As the home search draws to an end, many soon-to-be homebuyers begin to imagine how they’ll repaint their new walls or renovate the kitchen. But replacing the heating, ventilating and air-conditioning (HVAC) equipment? It’s rarely on the top of most homeowners’ can’t-wait-to-do lists. In fact, when HVAC problems do arise during the pre-closing inspection, they can grind the sale process to a screeching halt.

“It happens all the time,” says MJ Seiler, broker/owner of Century 21 Kreuser & Seiler in Libertyville, IL. “Even though most purchase contracts say, ‘The fact that a functioning major component may be at the end of its useful life shall not render such component defective for purposes of this inspection,’ many buyers still try to get the seller to adjust the price due to the age of the HVAC systems, for example. Most sellers will reply that the buyer’s request is outside of the obligations of the contract and that the HVAC works just fine. Hence, we often have a standoff.”

There’s no need to let a dated furnace or faulty air conditioner derail your sale, especially if you and your clients are prepared to address some of the most common HVAC problems that appear during home inspections.

Whether it’s the escape of refrigerant or gasses, leaks are among the most common—and potentially dangerous—problems you’re likely to encounter with an HVAC unit.

This certainly proved true during a recent sale for Kelly Schneider, a real estate agent with Re/Max Beyond 2000 in Middleburg Heights, OH.

“The buyer’s inspection came back that the heating unit was emitting enough black soot-like build-up and carbon monoxide that it was deemed deadly,” Schneider says.

While a problem this severe should have buyers thinking twice, it doesn’t have to send them back to the listings. In this case, Schneider requested that the unit be serviced, the ducts and unit cleaned and the whole package certified by a licensed HVAC contractor to be in good working order.

Like Schneider, Joe Coyne, SRES, broker/owner of REMAX Exclusive in Saint Peters, MO, has seen his share of leaks. In fact, Coyne says, “The biggest [HVAC] problem that we run into is the gas line leaking.”

In Coyne’s market, until recently, an inspection from the local utility had been a standard part of any home purchase. Now the buyer has to request the additional step. “For a vacant home, it’s strongly recommended just because you don’t know,” Coyne says.

In some cases, a leak can be the first indication of something bigger.

As Coyne recalls, “The last HVAC problem we had was a house where the furnace failed the gas inspection due to a bad heat exchanger.”

The heat exchanger is one of the most critical components of the furnace as it is the mechanism for converting fuel to heat. A broken heat exchanger has the potential to release gas into the air, making this a dangerous, and expensive, deal-breaker. Unfortunately, this problem isn’t likely to be caught with a standard home inspection.

“A lot of buyers aren’t aware that with modern, forced-air natural gas-fired heating system, home inspectors are within their standards of practice when performing a visual inspection, which does not include most of the heat exchanger,” points out Matthew Difanis, broker/owner of RE/MAX Realty Associates in Champaign, IL.

Difanis also encourages sellers whose homes have older HVAC systems to hire a licensed professional for a routine service call and to provide a written clean bill of health.

“That is extraordinarily valuable if the system is obviously older,” Difanis says. “Otherwise any buyer who walks in the door will be looking at it thinking ‘this has ticking time bomb written all over it.'” On the buyer’s side, if this routine cleaning hasn’t been done, the buyer can offer before closing to pay for such servicing, especially if they can get an agreement that the seller will pay for any material defect the invasive inspection turns up.

Annual maintenance plays a huge role in how well HVAC holds up. Jim Schwarz, owner of Center Grove Real Estate Inspections in Greenwood, IN said “I have found that few homeowners actually have their system under a service contract. Generally, if under contract, the systems are running quite well and their maintenance is very obvious and recorded. Mostly, systems are totally ignored.”

As Wendy Papasan, realtor and owner of the Papasan Real Estate Team @ Keller Williams Realty in Austin, Texas, found out in a recent sale, homeowners who neglect annual maintenance may be in for a rude awakening when it’s time to sell.

“We had a buyer who was trying to decide between two homes,” Papasan recalls. “I was present when the inspector pointed out the poor condition of the air-conditioning unit: the vent pipe was disconnected and air that was meant to go outside was blowing around inside the AC closet. While this fix was an easy one, the buyer was turned off and ended up making an offer on the other home.”

Not all maintenance issues are so visible as this one, so Papasan suggests clients pull out the filters on heating and cooling units to ensure they’ve been changed recently. “How well an HVAC unit has been maintained can be indicative of how well the entire home has been maintained. If it’s filthy, that can be a clue,” she says.

A home warranty often is a recommended solution for potential heating and cooling problems. “If the HVAC is in operating condition, we are often able to convince the seller to purchase a home warranty that will cover the HVAC system should it become defective in the future. This usually satisfies the buyer’s concerns,” Seiler says.

“Home warranties are a real positive, depending on the company you get,” agrees Rebecca Strobel with REMAX Professionals in Lakewood, CO. “I would suggest [buyers] get the home warranty company out to look at stuff and see what can’t be warrantied, because spending $350 to $545 for a home warranty is definitely a lot better than spending $8,000 and up for a new water heater, furnace, etc.”

According to the National Association of Home Builders, most HVAC systems have a life expectancy of between 15 and 20 years. Depending on how they’re maintained, some may hold on longer than others, as Strobel learned when listing one older home.

“We had a great offer but when it came to the inspection, this old home—over 100 years—had an ancient furnace that needed to be replaced,” Strobel recalls. “It was leaking and there were numerous other issues.”

The furnace was a dangerous antique that the sellers knew had to be replaced, a verdict confirmed by the inspector who called it “unsalvageable.” Ultimately, the sellers sank more than $25,000 into replacing the system—and still lost the sale.

“After much back and forth and, it turns out, to-do about nothing, the buyers decided that this was too big of an item to deal with,” Strobel says. “This made them leery of any other items that might need work and cost them more than they were hoping to invest in the home.”

If a unit does need to be replaced, Strobel suggests seeing if the buyers can meet the sellers halfway on the purchase price, since they’ll be the ones benefiting—or not—from the new heating and/or cooling unit. That compromise could prove worthwhile in the long run. “Get a high energy high efficiency unit and make sure it’s certified and taken care of annually and you’ll be paying that back to yourself over the years,” she advises.

On the other hand, if age is an obvious problem it might pay for sellers to switch before they list.

Papasan recalls one home visit with a buyer where this proved effective. “As we pulled up there was an HVAC installer putting in a brand new unit. The old one had conked out the day before putting it on the market. Our buyer put an offer in on the first day it hit the market,” she says.

Vacant homes make an all-too-easy for target for vandalism and theft. The components inside HVAC equipment can prove tantalizing to thieves who will scrap the materials for cash, as Lori Bonarek, a broker with Coldwell Banker Honig-Bell in Will County, IL, discovered.

“It was winter and the unit was snow-covered,” Bonarek recalls. She had just arrived with the potential homebuyers at the home as the home inspector did a primary inspection. “He turned on the heating and the air conditioning, but the AC wasn’t working. So he went outside, dusted the snow off of the air conditioner and said ‘All of the interior components are missing.’ I said ‘You’ve got to be kidding me!'”

In this case, the problem was solved when the seller agreed to take a credit. “We realized if we put it in and the house was still vacant, if it happened once it could happen twice,” Bonarek says.

The performance of HVAC equipment shouldn’t be overlooked during the sale, but these systems also shouldn’t be deal-killers. According to Difanis, it’s the responsibility of the buyer’s agent to help homebuyers set realistic expectations in terms of solutions to these common problems.

In the event of an HVAC replacement, Difanis says, “The buyer’s agent, who is looking out for their interests, needs to explain to them they aren’t entitled to 100 percent of a new unit, since that’s an unbargained for upgrade.” He adds, “A lot of the trick in working through that really involves setting realistic expectations with the client.”

But for Bonarek, it’s a matter of ensuring realtors stay educated on these systems to keep up with today’s savvy homeowners. “Buyers are a lot more educated than they used to be,” she says. “Even if their agent doesn’t educate them, I’m seeing that they’re better at educating themselves now.”